The Alliance of American Football (AAF) has named David Cohen as head of player operations for the league. In this role, he will work closely with Troy Polamalu, The Alliance head of player relations, to “ensure a first-class experience that will prepare players for success on and off the football field.”

“We have placed the utmost importance on investing in players and are committed to implementing programs that will positively impact their overall physical, mental, financial and spiritual well-being,” said Polamalu. “I … look forward to seeing what we can accomplish together.” 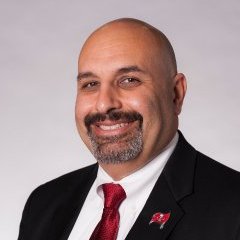 Cohen is a licensed California attorney and a National Athletic Trainers Association certified athletic trainer. He founded Major League Business LLC in February 2018, providing consulting and executive coaching services to companies and individuals both across and outside of the sports industry. Before launching Major League Business, Cohen served for five years as the General Counsel of the Tampa Bay Buccaneers.

Before joining the Buccaneers, David spent nine years overseeing the legal department for Angels Baseball LP and AM830 KLAA, and nine years working as an athletic trainer in the Baltimore Orioles, Boston Red Sox, and Montreal Expos organizations. Cohen earned a bachelor’s degree in exercise physiology and athletic training and a master’s degree in community health promotion from West Virginia University in Morgantown, West Virginia, and his JD from California Western School of Law in San Diego, California.

“I hope to use my experiences as an athletic trainer, general counsel, and C-Level sports executive to create programs that help The Alliance achieve its mission and stay true to its vision,” said Cohen. “Over the coming months, we will roll out groundbreaking initiatives that will demonstrate our commitment to Alliance players, fueling their growth in ways that extend well beyond the field of play.”

Alliance players will be signed to a three-year contract with a minimum base salary of $250,000 over that span. The Alliance “will provide players with a commitment to safety and state-of-the-art equipment as well as a comprehensive bonus system, post-football career planning, financial counseling, scholarship support for postsecondary education and more.”

The Alliance of American Football was founded by TV and film producer Charlie Ebersol and Hall of Famer Bill Polian, The Alliance will feature eight teams with 50-player rosters playing a 10-week regular season schedule in the spring beginning February 9, 2019 on CBS, followed by two playoff rounds and culminating with the championship game the weekend of April 26-28, 2019.