Many interscholastic athletes, particularly high school football players, are likely to incur concussions while participating in a sport (McCrea, Hammeke, Olsen, Leo, & Guskiewicz, 2004). Copeland (2010) further indicated that 3.4 out of every 1000 athletes suffer a concussion in interscholastic contests or practices. Because of increasing documentation of sport-related concussions, public awareness has also increased. It is, therefore, essential that high school officials such as athletic directors, coaches, and athletic trainers be aware of the standard of care guidelines to manage the risk of concussion that could reduce potential litigation. A primary source of these guidelines may be found in the state athletic association policies. 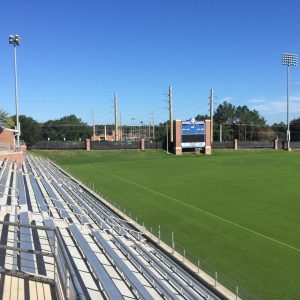 Currently all 50 states, plus the District of Columbia, have sport-related concussion laws in place (Weinberger & Briskin, 2013).  However, most state courts have expressed a reluctance to interfere judicially with the contractual relationship between a state high school athletic association and its member schools (Mitten, 2014). Courts have also taken the position that they are not in the best position to decide sports disputes and instead defer to sport regulators and voluntary associations to make decisions according to their own rules (Indiana High School Athletic Association v. Carlberg, 1997). Furthermore, Crane v. Indiana High School Athletic Association (1992) suggested that the state governing body’s rules, interpretations, and applications should be published to provide standard of care guideline to its member schools, students, and parents.

The results of a study on state high school athletic association policies for managing sport-related concussions revealed that concussion education policies for more than 70% of high school athletic directors did not exist (Miller & Ammon, 2017). However, nearly 75% of coaches were required to review concussion information or follow the standards set by the National Federation of High School Associations (NFHS). Almost 65% of the state policies required licensed medical personnel such as team doctors to make the final concussion diagnosis.  Disturbingly, more than 5% did not specify a policy as to who is responsible for a final concussion diagnosis. When describing the type of concussion protocols, 48% did not indicate any type of concussion protocols to be followed during a contest. However, 22% followed NFHS policy guidelines. While nearly 50% of the state policies did not specify return to play guidelines, 36% followed NFHS policy guidelines.  Alarmingly, one state policy allowed a concussed high school athlete to return to play after 24 hours. Finally, 58% of the policies indicated that only a medical doctor could provide the final approval to return a high school athlete to play.

The court in Crane (1992) mandated that all policies of state high school athletic associations must be clear and unambiguous, reasonably interpreted in light of their legitimate objectives, and consistently applied. Clearly, this is not the case regarding high school state policies for concussion management.  Without the implementation of standard guidelines to manage the risks of concussions, the potential exists for a concussed player to be placed in a situation that increases his or her exposure to greater harm, thereby increasing the likelihood of possible litigation against the school (Kleinknecht v. Gettysburg College, 1992; Osborne & Ammon, 2012; Pinson v. Tennessee, 1995). Ideally, the implementation and enforcement of standards for education, prevention, and approval for return to play should set a higher standard of care for sports programs relative to athletes who suffer from concussions. While knowledge by itself does not equal appropriate action, a uniform development and implementation of state policies dealing with concussive incidents would create a culture of safety for concussive incidents of high school athletes.