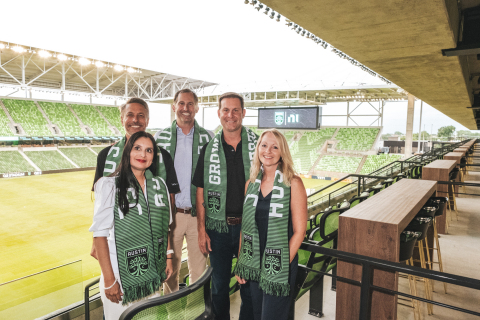 Austin FC has announced that NI (NASDAQ: NATI) has secured entitlement of the NI Suite Level at Q2 Stadium in a multi-year partnership that sees the Austin technology company join forces with Austin FC, the city’s Major League Soccer Club and first major league property. As part of the partnership, NI will also be the presenting sponsor of the pre-match Standings and League Leaders feature during Austin FC home games.

“Austin FC is proud to align with a homegrown Austin company that represents a commitment to innovation and a commitment to exploring technology solutions that can create a lasting impact in our community,” said Andy Loughnane, President of Austin FC. “NI has a successful track record of investing in Austin, and our Club is honored to be working alongside one of the first tech-forward firms to have successfully established its roots in Austin.”

“Like NI, Austin FC has big ambitions. They are determined to bring the world’s game to our city. And like us – they are taking the long-view, with a 100-year ambition that includes positively impacting our community through initiatives aimed at increasing diversity, equity, and sustainability in Austin,” said Eric Starkloff, NI CEO. “Our shared values, focus on impact, and deep appreciation for the diverse and vibrant community that Austin embodies are what cemented this exciting partnership.”

The partnership also establishes NI as the presenting sponsor of the Standing and League Leaders digital feature, which gives fans data driven insights into real-time player statistics ahead of Austin FC home games.