In passing the $900 billion year-end spending bill Monday, which is expected to be signed into law within days, Congress has included a rider to ban race-day doping of Thoroughbreds: the Horseracing Integrity and Safety (HISA) Safety Act. H.R. 1754/S. 4547, concluding an eight-year campaign instituted by activist groups to end medication abuses leading to breakdowns and injuries and deaths on tracks across the nation.

“We don’t allow doping of athletes in cycling, baseball, and other professional sports,” said Wayne Pacelle, president of Animal Wellness Action. “It’s should be a no-brainer to forbid this form of cheating and dangerous treatment of horses in American Thoroughbred racing, too.” 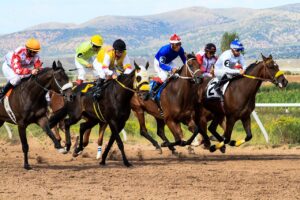 “The passage of the Horseracing Integrity and Safety Act is the biggest gain in Congress for horses in half a century, will put the welfare of the horses at the center of the enterprise, and put the sport on a level playing field that aligns with global standards,” said Marty Irby, executive director at Animal Wellness Action, who was named as one of The Hill’s Top Lobbyists for 2020, was recently recognized by Her Majesty, Queen Elizabeth, II for his work to protect horses, and testified before Congress in support of HISA in January. “We applaud Senate Majority Leader Mitch McConnell, Sen. Kirsten Gillibrand, and Reps. Paul Tonko and Andy Barr for saddling up and pushing the ban on doping in Thoroughbred horse racing over the finish line.”

The Horseracing Integrity and Safety Act includes a ban on race-day doping, the establishment of a uniform national standard for rules and regulations for U.S. horseracing that would be overseen by the U.S. Anti-Doping Agency (USADA). The Horseracing Integrity and Safety Act (HISA) is landmark legislation that would directly address the safety and welfare of racehorses, and the integrity of the sport itself, through better anti-doping measures and racetrack safety standards. The doping of American racehorses has been the subject of Congressional attention over the past five years with hundreds of horses dying on racetracks weekly, and the indictment of 37 trainers and veterinarians in March of 2020.

The bill has the support of Animal Wellness Action (AWA), the Animal Wellness Foundation (AWF), Horses for Life Foundation, the American Horse Protection Society, the Center for a Humane Economy, and key players throughout the horse racing industry, including all three Triple Crown racetracks. Churchill Downs, which runs the Kentucky Derby, is the most recent corporation to get on board. The effort continues to enjoy the support of the Coalition for Horse Racing Integrity (CHRI), which includes The Jockey Club, the Breeders Cup, Keeneland Racecourse, the New York Racing Association, The Stronach Group, the Thoroughbred Owners & Breeders Association, the Water Hay Oats Alliance, U.S. Harness Racing Alumni Association, and Animal Wellness Action.