(Editor’s Note: The following is a statement from the Cleveland American Indian Movement on tangible steps to be taken immediately in light of Cleveland Baseball team name change.)

Fifty years ago when Cleveland American Indian Movement began the movement to eliminate the Cleveland Baseball “Indians” team name and “Wahoo” logo, we were responding to the wishes of our local Native community, and our elders and leaders in the Nations, who saw causation between the dehumanizing aspects of these images and the abusive environment experienced by indigenous peoples. During this half-century of activism we have regularly demonstrated at various stadiums every opening day and throughout the season; we have sued the Cleveland Baseball franchise and the stadium on different occasions, on various grounds, including those of free speech; we filed a civil rights complaint and a federal trademark petition. Yet Cleveland Baseball failed to dialogue with the local Native community, failed to listen, and failed to act.

Roughly thirty years ago the National Congress of American Indians issued a resolution denouncing the “Use of any American Indian Name or Artifice Associated With Team Mascots by any Professional/Non-professional Sport Teams”. Yet Cleveland Baseball failed to dialogue, failed to listen, and failed to act. 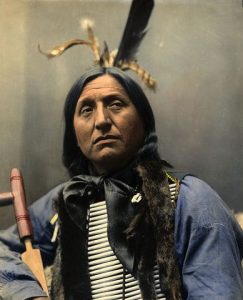 Some twenty years ago, when the U.S. Commission on Civil Rights stated that sports mascots “encourage biases and prejudices that have a negative effect on contemporary Indian people”, the NCAA enacted regulation which effectively banned the tokenization of Native peoples at the collegiate level. At the professional level however, Major League Baseball and its Cleveland franchise failed to listen, failed to learn, failed to act.

In the last ten years, an increasing number of studies have indicated that sports mascots have adverse effects on self-esteem, feelings of community worth, and feelings of achievement related to “possible selves” for indigenous children. And still Cleveland Baseball failed to learn and failed to act.

This pattern of shameful and exploitative conduct on the part of Cleveland Baseball must not be overlooked. And due to its ignominious history of engagement with the local indigenous community, it is wise of us to question whether the decision to finally change its name and “advance social justice” is sincere or simply a public relations decision on the part of the franchise. Nor should it be lightly noted that even with continuous indigenous activism, it took the very public execution of a person of color and weeks of civil disobedience before Cleveland Baseball has become willing to reconsider its morally bankrupt decisions of the last half-century.

The time for Cleveland Baseball to act is now! Not next year. Not next month. Not next week. To that end, and in an effort to restore balance, Cleveland AIM has outlined actionable steps we believe Cleveland Baseball should implement immediately to stop the ongoing harm, resist further harmful action, and begin to repair the harm which has occurred as a result of the marketing of “Indians” and “Wahoo”, and public culture built around being part of “The Tribe”.

1) Immediately cease using the “Indians” and “Tribe” monikers, and choose instead to refer to the franchise as “Cleveland Baseball” until such time as a mechanism for re-branding has been formulated; ensure rebranding efforts do not reference indigenous peoples, our cultures, religions or cultural items in any way.

2) Immediately stop licensing the “Wahoo” logo, retract any licenses currently negotiated, and maintain the trademark so that it may not be further exploited.

3) Aggressively pursue through legal means those organizations which violate use of the “Wahoo” trademark; this action will show that that the franchise is taking an active approach to preventing further harm.

4) Apologize publicly to indigenous people for ignoring and marginalizing us for the last 5 decades, and for a century of a harmful decisions which were exploitative and dehumanizing.

b) General public. To show that Cleveland Baseball understands the magnitude of harm its 105 years of propaganda have caused indigenous people in particular and public consciousness in general, by deconstructing the true histories of the name and logo, their use and the history of indigenous dissent to their use, what the franchise did wrong, and why it is absolutely unacceptable to participate in culturally abusive behavior.

Dialogue-building with Cleveland AIM around the immediate implementation of these actionable steps, and discussions with the larger Native community around the future of the relationship between us and the franchise, will show that Cleveland Baseball understands its stated commitment to social justice and rejects exploitation of indigenous people and the legacy of White Supremacy.

With due respect, great humility, and in the spirit of cooperation.