Champ Bailey has announced that he has chosen Drew Eckl & Farnham Partner Jack Reale to serve as his presenter when he’s enshrined into the Pro Football Hall of Fame in August.  Reale has served as Bailey’s agent, attorney, and friend for the last 20 years. 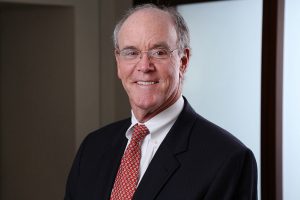 “I am honored that Champ has chosen me,” said Reale.  “It was truly a joy watching him grow and develop into the league’s best defensive back and I am proud to be here for the next step in his journey.”

Bailey is one of the eight members of the Pro Football Hall of Fame’s Class of 2019, which was announced in February 2019. The ceremony will be held in Tom Benson Hall of Fame Stadium, adjacent to the Hall of Fame, in Canton, Ohio, on Saturday, Aug. 3, 2019. The enshrinement is the marquee event of the annual Enshrinement Week Powered by Johnson Controls that kicks off the NFL’s 100th season.

The Washington Redskins selected Champ Bailey, a consensus All-American out of Georgia, seventh overall in the first round of the 1999 NFL Draft. Bailey quickly established himself as perhaps the league’s best defensive back over the next 15 years.  To date, he is the only NFL cornerback selected for 12 Pro Bowl appearances.

In all, Bailey played in 215 career games with the Redskins (1999-2003) and the Broncos (2004-2013) starting in all but three games. He amassed a total of 908 tackles (812 solo), intercepted 52 passes which he returned for 464 yards and four touchdowns, recorded three sacks, made six fumble recoveries and had 203 passes defensed, which is still an NFL record. Bailey led the NFL in interceptions in 2006 with 10, recorded 85 tackles and was runner up for NFL Defensive Player of the Year.  His 18 interceptions during the 2005 and 2006 seasons tied the NFL record for most interceptions over 2 seasons.

Reale, meanwhile, has been practicing law for 43 years and has represented numerous professional football players in the negotiation and drafting of playing contracts and commercial endorsements as well as estate planning, tax preparation, and general legal services. He has represented first round draft picks, and a number of NCAA National Football Coaches of the Year, as well as an NFL Coach of the Year. Reale is the Workers’ Compensation panel attorney for the NFL Players Association for Georgia and has the distinction of being the first licensed sports agent in Georgia.  Reale has previously served as co-managing partner of the firm for 8 years.

As part of his practice, he also represents sports venues in general liability claims.  He has represented Atlanta Motor Speedway, Turner Field, Philips Arena, the Atlanta Hawks, the Atlanta Braves, Road Atlanta, and the Chick-fil-A Bowl.