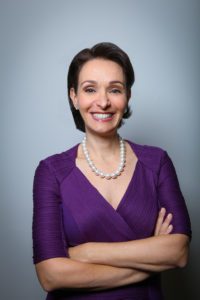 The Paradigm Award is given annually to a distinguished Greek American whose career achievements and personal accomplishments reflect the Foundation’s mission and vision of building a better America through education and Hellenism. Honored not only for the professional success they have achieved; Paradigm award honorees are recognized for upholding the values and ideals of their Hellenic heritage—serving as inspirational figures for our scholarship recipients.

“It is a tremendous honor to be recognized with the Paradigm Award by the PanHellenic Scholarship Foundation,” said Kolokotronis, who previously was an Adjunct Professor of Law at McGeorge Law School, University of the Pacific where she taught Sports Law. “I am thankful for the opportunity to work for a franchise I love, in a position that challenges me, with the unwavering love and support of a family who I’ve been so lucky to raise with strong Greek traditions.”

Entering her 22nd season with the NBA, Kolokotronis has decades of experience in sports and government law, community affairs and contract negotiations. Her leadership has been integral to the development of the award winning Golden 1 Center. Recognized as the greenest and most technologically-advanced arena in the world, it is the first professional sports venue to achieve LEED Platinum certification.

Kolokotronis is the only female in the NBA to hold the titles of both COO and President of Business Operations.