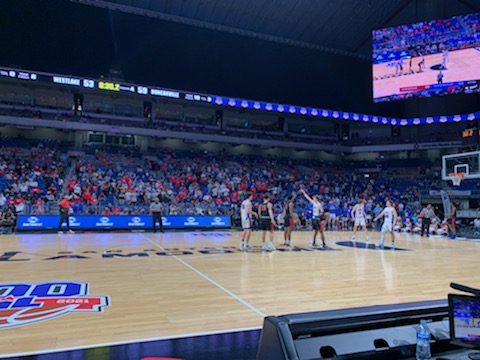 (The following piece was written by Law Professor Ellen M. Zavian, with research assistance from Brandon Martinez Gonzalez, GW Law 1L. Professor Zavian is the Editor in Chief of My Legal Bookie, a periodical produced by Hackney Publications.)

A friend of mine, Brandon, is a University of Virginia (UV) law student, and he is talking trash to his buddy, Allan, who attends the University of Maryland (UM). Although these teams are seeded close in the 2021 March Madness rankings, Brandon and Allen are eager to place a friendly wager on their alma maters.

Brandon logs into one of his favorite betting sites and attempts to place his bet. However, a pop up occurs and blocks his ability to place his bet, due to his GPS location being dinged at UV’s campus. Conversely, Allan places his bet, from his UM dormitory, with ease, placing money on his Terps in seconds.

Brandon begins to explore what his options are, after all, his team is only two years removed from winning the National Championship and believes they can do it again. His search brings up many issues, but they all seem to fall upon the recently passed Virginia Sports Betting Law, which prohibits Virginia residents from betting on Virginia-based college games. It seems to stem from the legislature’s concerns over protecting the college athlete from feeling any ‘pressure’ to alter a game’s final score. Brandon understands the premise of this exclusion, to protect the local student-athletes from any temptation or pressure that might lead them to throw away their education, potential future in the pros, or even put them in jail for a cut of the pie, under the table, from some local bookie.

Virginia is not alone. Eleven out of the 26 states that allow sports betting have such explicit limitations on in-state college teams. For some states like Rhode Island, the laws follow the teams, prohibiting Rhode Island based fans from placing bets on Rhode Island college teams, even if those teams are not playing in the borders of the state (in other words, when the teams are playing an away game). Other states go further, to not allow sports betting on amateur level sports (such as high school competition and esports), elections, and even the Oscars!

Here is a brief listing on the 11 states:

While some students might just call it quits in Virginia, it does not seem Brandon is one of them. Instead, he is driving to Washington, D.C., to place his bet, legally.