In 2014, the Center for Disease Control (CDC) reported approximately 2.87 million concussion-related hospital visits including 837,000 cases involving children (CDC, 2019a). Additional estimates report between 1.1 and 1.9 million sport and recreation-related concussions occur annually for youth 18 and under in the United States (Bryan, Rowhani-Rahbar, Comstock, & Rivara, 2016). In 2017, 2.5 million high school students reported suffering at least one concussion, while 1.0 million students reported suffering at least two (DePadilla, Miller, Jones, Peterson, & Breiding, 2018). In 2019, a study found signs of chronic traumatic encephalopathy (CTE), the neurodegenerative disease stemming from repeated brain trauma, in 177 of 202 individuals who previously played high school, college, or professional football (Mez et al. 2017). These figures are particularly troublesome given youth who experience a concussion are one and half times more likely to experience a second concussion (Brody, 2015). Additionally, reported concussions and associated lawsuits, are on the rise in young male and female athletes participating in soccer, ice hockey, field hockey, lacrosse, and cheerleading (CNN, 2019; Bomgardner, 2019).

Youth concussions are more difficult to recognize, more severe, and require more recovery time as the brain is simultaneously growing and injured (Belson, 2017). Further, having an underdeveloped brain when a concussion occurs, can leave young athletes especially susceptible to impacts on their quality of life over time (Amberg, 2012). As a result, the CDC has identified traumatic brain injuries (TBIs) and concussions in sport as a national public health issue (CDC, 2019a).

Awareness and policy regarding the national concussion issue appears to parallel with waves of popular culture’s focus on these injuries. In 2012, the class action lawsuit of over 80 concussion-related claims filed on behalf of over 2,000 NFL players was shortly followed by PBS Frontline’s documentary film, League of Denial: The NFL’s Concussion Crisis in 2013, and the 2015 biographical-drama Concussion, chronicling research revealing the destructive relationship between NFL players and CTE. During this time, the NFL was largely denying any relationship between concussions suffered by NFL players and the diagnosis of CTE among retired players. Ultimately, the NFL settled litigation brought by several retired players in the amount of over $700 million (Dingus, 2020). 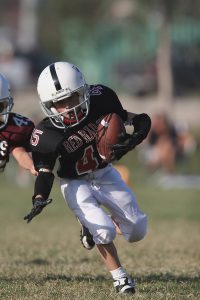 The concussion issue has resurged in popular culture by means of a Netflix docu-series: Killer Inside: The Mind of Aaron Hernandez (2019), and Cheer (2020) which have focused more attention on the exposure to concussions by athletes early in their playing years including high school and college. Although the youth sport concussion issue has yet to be magnified in television and film, the documentation of younger athletes alludes to the importance of advocating for, and protecting young brains.

Legal protections for youth athletes related to concussions have been evolving since the mid- 2000s. The 2009 Zackery Lystedt Law (HB 1824), named for Zackery Lystedt, a young boy who suffered a catastrophic and life-altering concussion while playing football and was allowed to return to the game in 2006, triggered concussion education, removal of play policies, and return to practice or play restrictions in the state of Washington (Bompadre et al., 2014). With HB 1824, Washington became the first state to legally establish a concussion protocol for youth and high school athletes. Lystedt’s family filed a lawsuit on Zackery’s behalf against the Tahoma School District, receiving a $14.6 million settlement (Clarridge, 2009). Since 2014, all 50 states have followed Washington’s lead by passing some type of concussion legislation to include concussion awareness or education (Potteiger, Potteiger, Pitney, & Wright, 2018). Additionally, 37 new bills were introduced in 2018, reflecting both the fluidity and significance of youth sport concussions (Green, 2018).

Like the Lystedt case, negligence claims stemming from sport-related concussions in young athletes typically challenge the school or sport organization’s standards of care and return-to-play (RTP) guidelines. To date, there has been minimal focus on the athletes’ ability to return-to-learn (RTL) or return-to-school (RTS), which could lead to additional litigation should the child be denied the opportunity to succeed academically (Thompson, 2016).

Despite the national attention given to youth concussions catalyzed by the Zackery Lystedt Law, previous research shows policy variation in terms of enforcement, application, and requirements (SHAPE America, 2017; Amberg, 2012). Policy disparity in terms of lack of standardization and consistent language can lead to improper standards of care across state lines (Kim, Connaughton, Spengler, & Lee, 2017). Kim et al. (2017) explored these inconsistencies by examining concussion legislation enacted or amended in all 50 states and the District of Columbia (D.C.) between 2009-15, finding substantial nationwide discrepancies in policy scope and applicability, education and training requirements, and removal from play and RTP criteria. The severity and flexibility of concussion issues warrant regular medical and scholarly review. Therefore, the purpose of this study was to assess current nationwide youth concussion legislation to identify trending commonalities and updates, and discuss major gaps or differences between them.

Researchers located, reviewed, and analyzed youth concussion legislation in all 50 U.S. states and the District of Columbia. This analysis revealed a wide range of inconsistencies in specific language primarily related to governing bodies for concussion management oversight, athlete removal, parent notification, RTP, and RTS/RTL, allowing youth athletes to be subject to a range of what is considered appropriate standards of care. Researchers discovered some states provided only minimal guidance for athletic administrators and have decentralized policies for enforcement and training. For example, Maine’s Department of Education organized a working group to manage youth concussion care, but the state’s legislation fails to delineate specific language on training and policies for coaches, players, and parents (Maine Legis. Assemb, 2012). Other states have expanded and improved on existing concussion legislation by providing clear decision making structures and standards. For example, Illinois amended its concussion law in 2018 to be one of the country’s strongest, and includes definitions of all parties involved (i.e., definition of an athletic trainer), designated parties for removal and return-to-play, concussion oversight teams, and return-to-learn protocols (Illinois Legis. Assemb., 2018).

There does appears to be a general positive trend toward comprehensive concussion protocols across the United States, as there have been 21 state legislation amendments since Kim et al.’s (2017) data collection. Thus, a good number of states do appear to realize that as we gain better medical and scientific knowledge related to concussions, the legal standards for protecting young athletes must be modified to reflect the current knowledge. While it is important to note states are including more language related to key themes identified by Kim et al. (2017), since then two additional themes were identified: protocols providing for a return-to-academics policy, and a 24-hour parent notification requirement when an athlete shows concussion symptoms.

Language on mandating a communication time period with parents following a head injury was largely inconsistent, with only nine states requiring parents be notified within 24 hours of the incident. Amended in 2018, Arizona’s concussion protocol includes this window to involve parents in the decision-making process regarding their child’s injury and ability to return-to-play (Green, 2018). Under the umbrella of Return-to-Academics are RTL and RTS. Currently, only 10 states’ concussion protocols contain specific language on when an athlete may return to the classroom. RTL considers the educational endeavors outside of the class like extracurricular activities, tutoring, and reading, rarely accounted for by states. This is particularly worrisome because the CDC states concussions may hinder students’ learning abilities, cause prolonged headaches, and exaggerate difficulties with paying attention (CDC, 2019b).

The lack of consistency across state lines suggest a child’s treatment is determined by where they live and play, and the broad spectrum of protocols reveal certain athletes and their families would be severely disadvantaged over others. Standardized annual training and educational courses should be mandated for head coaches and athletic trainers, and every state should consider the academic-related cognitive impacts faced by young athletes. Regardless of state of residence or competition, concussion protocols should provide for the same designees for removing an injured athlete from the playing surface, and the amount of time in which a parent should be notified of injury. The compelling differences between states warrants the development of research partnerships to make continuous updates and monitor concussion protocol effectiveness.

Jessica R. Murfree is a Sport Administration doctoral student at the University of Louisville. Her research examines the relationships between sport and the natural environment.

Nicholas Swim is a Sport Administration doctoral student at the University of Louisville. His research examines gender and racial equity in intercollegiate sport, with an emphasis on student-athlete well-being.

Chelsea Police is a Sport Administration doctoral student at the University of Louisville. Her research interests include examining participation constraints in elite youth soccer development.

Center for Disease Control and Prevention. (2019b). Returning to school after a concussion: A fact sheet for school professionals. Retrieved from https://www.cdc.gov/headsup/pdfs/schools/tbi_returning_to_school-a.pdf

Brody, J. (2015). Concussions can occur in all youth sports. The New York Times. Retrieved from https://well.blogs.nytimes.com/2015/08/24/concussions-can-occur-in-all-youth-sports/