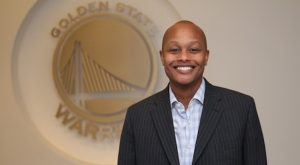 Kelly, entering his eighth season with the Warriors, is responsible for all legal matters affecting the company, manages matters related to the salary cap and luxury tax planning for the team, oversees the organization’s human resources department, and handles many of the company’s key projects and initiatives on both the business and basketball sides of the organization. Through his promotion, Kelly now also oversees player development and public/governmental affairs for the organization.

“David Kelly’s expertise in many different areas of our business cannot be understated, nor can his value,” said Welts. “As an organization, we have made it a priority for our business and basketball staffs to work together as a collaborative group and David has been instrumental in the success we’ve had with this model. His enhanced role in both areas will further strengthen that bond moving forward.”

As the Warriors continue to work toward the opening of Chase Center, their state-of-the-art sports and entertainment complex being built in San Francisco’s Mission Bay neighborhood, Kelly is on the forefront of all legal matters pertaining to the team’s new arena and ancillary development project. For Kelly, the large undertaking of this major real estate development includes managing entitlement efforts, the land purchase, construction issues and contracts, governmental relations and litigation. On the basketball side, Kelly’s responsibilities include managing the team’s salary cap, interpreting the league’s collective bargaining agreement, assisting with player personnel decisions, and implementing programs to assist players in their personal and professional development.

“David has played a visible and prominent role in our organization over the last seven years and has thrived in every situation. He’s a trusted staple of our franchise,” said Myers.

Outside of his work with the Warriors, Kelly serves on the board of directors for the Justice and Diversity Center and California Change Lawyers. He is also a UNCF Leadership Council Member and is involved in numerous bar associations across the country. Most recently, Kelly was named the 2018 Corporate Counsel of the Year in the Private Category by the San Francisco Business Times and Silicon Valley Business Journal.