Sports Law Professor on Referee Bias in the NBA

Sports Law Professor on Referee Bias in the NBA

“Take that for data,” the Grizzly coach emphatically stated, following the conclusion of his now memorable press conference.

A visibly upset David Fizdale was beside him during his rant following Memphis’ game (2) loss in this year’s NBA playoffs. The stats showed that the Spurs had a sizeable advantage in free throw attempts. How could that happen? Did the refs have something to do with it? Maybe, maybe not. 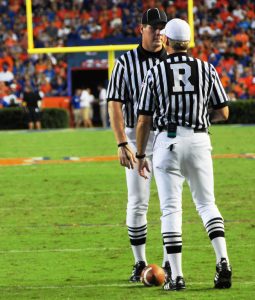 Ryan Rodenberg, an assistant professor of sports law at Florida State University, explores “ref bias” in his “think twice” article that cautioned against this type of thinking.

In reviewing several different studies on the subject matter, Rodenberg concluded that the Pedowitz Report, in some instances, questions the impact that referee bias may have on the integrity of the game. However, Rodenberg’s careful analysis and study of other allegations of “bias involving certain NBA referees against a specific player (Tim Duncan), a coach (Pat Riley), and an owner (Mark Cuban)” found nothing to suggest the existence of bias.”

More about Dr. Ryan at http://education.fsu.edu/faculty-and-staff/dr-ryan-rodenberg